June 20, 2017
I've been experimenting with Amazon ads for about a month now, and have some additional insight and tips to share. Unfortunately, it's been a long, strange trip, and explaining things clearly required a very long post. Please understand, this is just a summary of my attempts to navigate the Amazon advertising system and share what I've learned. What is working today may not work tomorrow, and results will certainly vary by user. 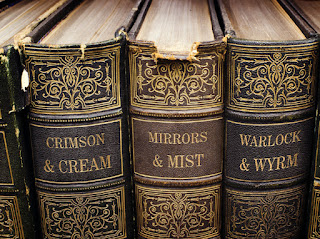 When advertising on Amazon, the options abound, and finding the right mix of all the variables can take time as well as money. I'll start by explaining my mistakes. My first was choosing to target "By Product" instead of "By Interest." This was my own intuitive choice in thinking that buyers of similar books are a better target than customers based on interest categories. Turns out I was wrong (in my case, at least).

After implementing the game plan I outlined in my last post, my ads were getting almost no impressions (i.e., Amazon was not posting them for viewing, so they weren't getting any clicks and I wasn't getting any sales). I reviewed the advice posts I'd referenced and realized I made a mistake in choosing 'By Product,' so I changed my ads to 'By Interest.'

Targeting "By Interest" allows you to pick from a list of Amazon categories to place your ads. For example, one category I chose was Science Fiction & Fantasy (SF&F): Adventure (see below). 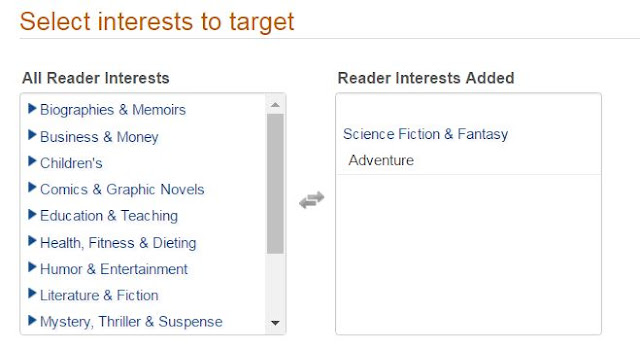 My second mistake was including the words "Free on Kindle Unlimited" in the body of my ad's text. When you create your ad, you make a headline (50 characters, maximum) and text (the body of the ad). Below is an example: 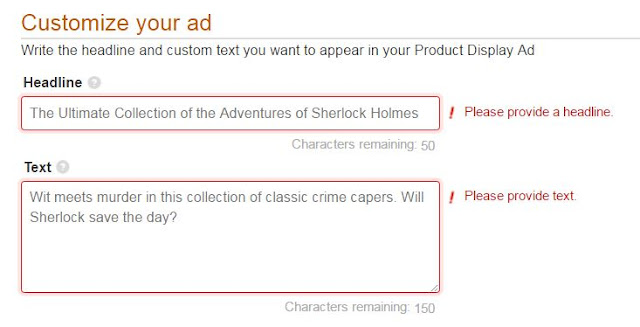 For the ads where I included the words "Free on Kindle Unlimited" in the 'Text' box, I received the following e-mail message from Amazon:


"Unfortunately, your ad campaign has not been approved to run on Kindle E-readers for the following reason(s): Your text contains the mention of a listed price of your product."

So, I fixed this mistake and removed any mention of the ebook's price (even 'free') from the ad's body text and then resubmitted, which led to my third mistake. In one of my new ads, I referenced the ebook's Amazon star rating, which is also a no-no. Amazon rejected this ad as well (I really should read their fine print more closely).

A nasty side effect of this mistake is that even when I created a completely new ad for the same ebook in the same category as the rejected one (SF&F; Adventure), Amazon has been rejecting the new, corrected ads for referencing star ratings (even though they don't). All I can figure is, the first ad for Crimson & Cream that I targeted for 'SF&F: Adventure' created some gremlin in Amazon's system so that now, whenever I try to place an ad for Crimson & Cream in the 'SF&F; Adventure' category, it get's rejected because the first ad referenced a star rating. I'm still working with Amazon support to correct this issue, but it's been two weeks and the problem's still not resolved.

Have I scared you away from ever trying to advertise on Amazon? I hope not, because despite these initial hiccups and the steep learning curve, I've actually got some ads that are selling ebooks and making a small profit.

I'm having better results with readers using Kindle Unlimited as opposed to purchasing the actual ebooks. As you can see from the graph below, my sales had flat-lined prior to starting the Amazon ads in June, but once the ads ran, both sales (top graph) and pages read on Kindle Unlimited (bottom graph) began rising. 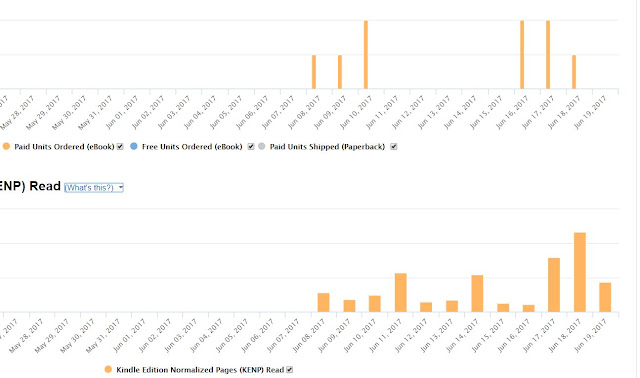 Unfortunately, Amazon does not provide enough information to easily determine if your ads are profitable or not. Revenue from ebook sales can be found on your KDP dashboard, however, earnings from the Kindle Unlimited program are not reported there.

This means there is guesswork involved when trying to determine your earnings on Kindle Unlimited. Right now, I don't have it figured out, but once I receive my Kindle Unlimited earnings for the month, I'll try to back-calculate those numbers into my ads' performance.

I started my ads with a Cost per Click (CPC) of $0.21, but found that I could lower this number and still receive a significant amount of impressions. I gradually lowered the CPC on my ads, and now I'm in the range of $0.11 to $0.13 CPC, depending on the ad. This has caused the number of impressions to drop somewhat, but it has decreased the amount I spend per click without any discernible drop-off in sales (if that makes sense). My goal is to find the lowest CPC rate that will still generate impressions (which lead to clicks, which lead to sales).

The Click Through Rate (CTR) for my ads is ranging from around 0.4 to 0.6. What this means is, I'm averaging one ad click approximately every 200 times the ad is shown. Of the potential customers who click on my ad, about one in 25 is buying the ebook. What you can't derive is how many pages read in Kindle Unlimited are generated from the ad.

The numbers above use figures from my best performing ad, and trend toward the optimistic end when you factor in all my mistakes and experimentation. Currently, after about three weeks of running an average of three ads continuously, I've spent $32 and earned approximately $43.

I'm curious to see if this earnings ratio will hold steady as I scale up and increase the number of my ads. Obviously, spending $320 to make $430 would be much better, but I suspect there is an upper limit. However, I don't want to underestimate the insane number of people who shop on Amazon, so I will began increasing my spend with more ads. I'll post another update next month, and share how my 'scaling up' efforts go, along with any other insights.

So far, I've had the most sales from the ad running in the Teen & Young Adult: Science Fiction & Fantasy category, but I'm also running adds in the SF&F: Swords & Sorcery and SF&F: Fantasy categories. Once my problem with the SF&F: Adventure category is fixed, I plan to run ads there as well. I've also started ads in the 'Literary & Fiction: Genre Fiction' category, but it's too early to see any results yet.

As always, I'm interested in reading about your experiences with Amazon ads as well, and learning any tips or advice you may have. Please feel free to share or ask questions, and thanks for stopping by.

Author Update: Warlock & Wyrm is now in the hands of my beta readers, and I'm giving it another read while I wait for them to finish. Once I have the beta comments back, I'll incorporate them and do a final polish before publishing. I'm still targeting a late August release.