October 26, 2017
Warlock & Wyrm, Book III of The Oxbow Kingdom Trilogy is on sale today at Amazon for 99 cents. After today, the price goes up by a dollar a day, until it returns to the regular $4.99 price. Grab your ebook now!

The 5-star reviews for Warlock & Wyrm are rolling in:

Tome Tender Book Blog: "Once in a while an author creates a world that combines humor, action, danger and the grit of a desperate battle for survival, transporting readers out of their reading chair and into the heart of the unfolding tale. C.M. Skiera has done that with his Oxbow Trilogy, building a world of fantasy that is filled with characters that will steal your heart, characters that will raise your ire and evil that seems insurmountable!"

"Warlock & Wyrm is the stunning conclusion to an epic tale of survival, coming of age, allegiance and sacrifice that hits with the force of a tsunami, page after page! C.M. Skiera has built a world to believe in, heroes to cheer for and tension that never lets up as once again, good versus evil meet on the battlefield where unlikely allies stand together, finally united in understanding and acceptance. I cannot recommend C.M. Skiera’s Oxbow Trilogy enough to anyone who wants to feel part of another world whose heart beats on the pages of every scene."

Author Brian Beam: "Warlock & Wyrm is a very satisfying end to the epic Oxbow Kingdom Trilogy. All the plot threads throughout the first two volumes begin to weave together, bringing the stories of the many characters we've grown to love to a suspenseful conclusion. The war that has been building up over the course of the trilogy finally comes to fruition, pitting the Oxbow Kingdom against the vile army of an ancient evil. Skiera does an amazing job describing the war, not shying away from the darker aspects of battle."

"While Jetsam and Seryn are the primary focus in the story, Jetsam's orphan friend, Ratboy, and the princess Giselle, have major story arcs of their own, giving both characters much more depth without sacrificing the near-constant action of the book. Each and every major character plays a significant role in the war, and in surprising and unique ways."

"It is always bittersweet to reach the end of an epic fantasy series, knowing you've reached the end of a grand adventure full of amazing characters, but I couldn't have asked for a more gratifying conclusion than that which Skiera has given us."

Amazon Customer Review: "A thrilling end to an amazing trilogy! After waiting with much anticipation for the final book of the Oxbow Kingdom trilogy, I was not disappointed. This one had all the excitement, adventure and fantasy as the first two, and then some! The descriptive writing captivated me, and as each chapter came to a close, I found myself wrapped up in the story and not wanting to put it down. Warlock & Wyrm took everything from the first two books, and added to the character's depth. The story line was well-developed throughout, and filled with descriptions and details that made me feel like I was inside of the Oxbow Kingdom. I could feel the emotions and empathize with the characters. I loved this well written fantasy trilogy and highly recommend it to everyone from ages 12-112."

Amazon Customer Review: "...truly an epic fantasy! I loved the first two books in the series and this one was a welcome return. A smart escape with some paranormal elements to add to its surprises. Sublime and original. This mega trilogy lured me in with so much action and drama. The mystery that was about to unfold would leave me curious with questions and guessing where this would lead us. The author has the ability to tell a fictional tale but done so in a way that the characters and their actions are believable."

Amazon Customer Review: "Once again I could not put this third book in the trilogy down from the moment I started reading. The book is written so well that it fills your head with imagery as if you were watching the story play out on a big screen. I am sorry that the story is ended but thoroughly enjoyed reading each book in this trilogy." 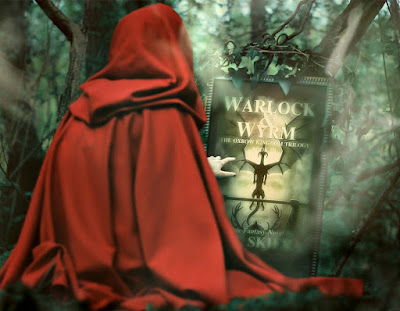