The Jealousy Glass (Artifacts of Empire)

December 01, 2012
Today I'm participating in a blog blitz for Gwen Perkins's new novel The Jealousy Glass (Artifacts of Empire).  There are all sorts of goodies below, so please check them out! 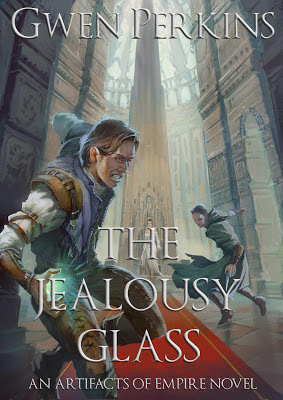 "We came to stop a war before it came to Cercia.  And it seems the war has come to us."

Responsibility and patriotism spur Cercia's new leader, Quentin, to protect his beloved country at all costs and he assigns Asahel and Felix to serve as ambassadors and secret agents to Anjdur. Their journey quickly turns awry and Asahel and Felix barely escape a devastating shipwreck, walk a tightrope of political tension, and rescue an empress before they learn they must face an enemy closer to them than they thought.

Will they be able to uncover an assassin's plot before it's too late? Will Asahel be able to unearth a secret that is vital to their mission? Will Cercia survive its own revolution? In The Jealousy Glass, Perkins boldly continues a series of unforgettable characters and events that will leave you begging for more.

In conjunction with the release of The Jealousy Glass, Gwen is running a giveaway for an autographed, first edition paperback of The Universal Mirror through Goodreads at: http://www.goodreads.com/giveaway/show/37726-the-universal-mirror

The giveaway officially ends on December 21, 2012—the author's birthday and supposed date for the oncoming apocalypse.

Gwen Perkins has always regarded the deep rainforest of the Olympic Peninsula as the one place that she feels most at home. Gwen grew up in small towns across the Pacific Northwest, going to slug races and strawberry festivals when she wasn't scribbling on any scrap of paper she could come by. She boasts the dubious distinction of going to a public school with only eight students, learning Irish sea chanteys from a man who sang with the Clancy Brothers, and catching tadpoles during classes.

Her adult life is generally just about as much fun.

She lives in the City of Destiny (better known as Tacoma, Washington). Her hobbies include wandering beaches, baking pies and lampworking. In between all of this, Gwen has written two novels in the Artifacts of Empire series: The Universal Mirror and The Jealousy Glass.  The Universal Mirror has been nominated for a 2013 Endeavour Award.

She is presently at work on future novels in the Artifacts of Empire series while working on another series in collaboration with Wilson Fabián Saravia.

Want more?  Here's an excerpt from the print version of the novel The Jealousy Glass:

"You're not the only one who was trapped, you realize."  Felix said.  Asahel glanced up, taking a few extra steps to catch up with the quick pace that Felix set.  "We were all trapped by the Heresies.  Any law that prohibited you was held over my head from the time I was born."
The Heresies were laws that bound magicians alone.  Among them, the foremost being the prohibition against using magic against humans, whether to harm or to heal.  Other Heresies governed more mundane areas—using magic to steal or to read another's thoughts without their consent was forbidden.  Each Heresy was enforced by the Council—or had been.  Quentin's ascension had changed all of that.  Now the Heresies were in flux and no magician knew quite what laws governed their behavior.

Old habits die hard.  Asahel wondered whether the old rules had been put back into place after the Serenissma had left port.  He found himself remembering something that they'd been told in university—that the Heresies themselves changed depending on the spirit of the age.
"Heresy.  It's such an odd word," he murmured, wondering if Cercia had found itself in another time of transition.
"Not so odd, considering.  We had a god...once."
"And then he was killed."  Asahel became even more thoughtful.  "No one ever questions that either.  Just like no one questioned why we had laws that prevented us from using magic on living beings."
Felix turned to Asahel and smiled.
"I thought you'd be done with dangerous questions," he replied.  Asahel ducked his head, glancing over at the bushes as he tried to think of a suitable response.
"Someone ought to ask," he said finally.
"And why?"  Felix countered.  "So we can create new gods?  Or should we come here to seek them out?  If we take their beliefs for our own, then there's no point to war, is there?  We'll already have given them the best of our country."
"What is that?" Asahel asked.
"The one freedom we had left," he said.  "The freedom not to believe.  The freedom to rely on ourselves for our own morality and to know for certain that our goodness came from ourselves and not some distant unknown."
"And you believe faith in a god would erase that?"  He wasn’t sure himself what he believed.  Everyone grew up with the stories of the dark times when Cercians had worshiped a vengeful god.  Everyone knew the consequences.  The idea was so distant that Asahel considered it little more than an idle theory to pass the time.
It was clear that Felix had thought about it more often as he answered, "Yes, I do."
"I don’t think so," the younger man said.  "People are the same whether they believe in a higher being or not.  I shouldn’t see that having a god absolves anyone of responsibility.  Rather, it ought to give them more of it."
Felix laughed.  "I hope you’ve the right of it, Soames."