June 03, 2013
Last week I posted about FastPencil, a self-publishing platform. Thanks to +Shah Wharton, I learned about Draft 2 Digital, yet another platform for self-publishing authors.

Whereas FastPencil appeared somewhat overwhelming with all its options, Draft 2 Digital is nearly the opposite. A clean, uncluttered interface with just five tabs, the Draft 2 Digital website is simple and easy to navigate. Draft 2 Digital doesn't have its own ebook storefront (like Smashwords) and it currently doesn't distribute to quite as many retailers, however, it current sales channels include:

Speaking of CreateSpace, which is a rather unique option for an ebook publishing platform, Draft 2 Digital states: "We can create paperbacks for any books generated through our conversion service (that is, everything except pre-formatted epub uploads). Simply choose CreateSpace as one of your sales channels at the publishing stage, and we'll begin the process."

So what's the final word? Draft 2 Digital looks like a competitive option for self-publishers, and as its distribution network expands, combined with its CreateSpace printed book support, it has the potential to move to the front of the pack. It's definitely worth keeping an eye on.

Author Update:  As Mirrors & Mist inches closer to self-publication, I'm also planning on re-releasing an updated version of Crimson & Cream, which will include minor text revisions based on another round of editing (with a new editor), and some extra content goodies, such as maps and a glossary. Below is the draft of one of the maps to be included, which covers the setting in which all three Oxbow Kingdom Trilogy books will take place. And I'd like to give a special shout-out to thank the folks at the G+ Community Map-Making in Games, who provided loads of good advice to this novice cartographer.  Thanks again for your support! 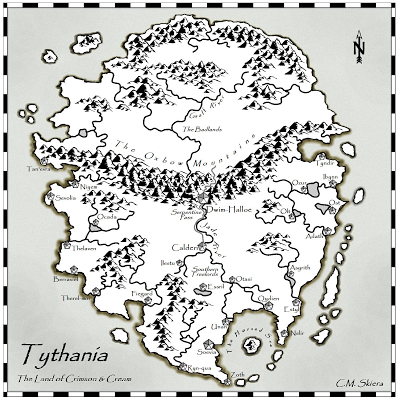