July 16, 2013
Here in San Diego, Comic-Con has been a big deal for decades.  I've been attending every year since 2007 and will be going again this year.  Although Comic-Con started as a comic book convention in 1970, it has grown into an all-encompassing entertainment expo, including writers and writing resources of all kinds (but especially speculative fiction).  Since this is a writing-themed blog, I'll focus on the writing-themed portions of Comic-Con, although it's but a fraction of the total spectacle.

Every year, best-selling authors attend the conference, meet with fans, speak at panels, and more.  A few years ago, I was fortunate enough to attend a panel featuring the late Ray Bradbury, one of my all-time favorites.  Hearing Mr. Bradbury speak left a lasting impression on me.  This year I'm excited to see a panel featuring some of the great writers in epic fantasy, including another one of my all-time favorites, Robin Hobb (Margaret Astrid Lindholm Ogden) who will be speaking along with Raymond Feist, Brandon Sanderson, Django Wexler, Melissa de la Cruz, Christopher Paolini, and Daniel Abraham.  How cool is that?

One of the few downsides to Comic-Con (besides crowds and getting tickets) is deciding exactly what events you want to attend.  For example, during the Epic Fantasy Panel I plan to attend, another one of my favorite epic fantasy authors will presenting be in a different panel going on at the same time.  Needless to say, it was a gut-wrenching decision to skip George R.R. Martin's Game of Thrones Panel, but since I saw GRRM & the HBO gang last year, I can't imagine passing up a panel with Hobb, Feist, Sanderson, et al.

In addition for the opportunity to get my fanboy on, Comic-Con also offers a plethora of writing-based classes.  Last year, I enjoyed two classes taught by fantasy author Maxwell Alexander Drake, who returns this year with additional classes I plan on attending.  About this time last year, I was preparing to self-publish my first novel Crimson & Cream as an e-book and attended a panel on self-publishing that was chock-full of helpful information.  I also met the nice folks at Compulsion Reads, who I ended up working with.  And this is really just skimming the surface of what's available at this massive show.

So if you happen to be attending 'The Con' this week, keep an eye out for me and say hi if you get the chance.  I'll be giving away free e-book coupons and wearing a tee-shirt with this Crimson & Cream word cloud on the front (and no, I don't cosplay--yet): 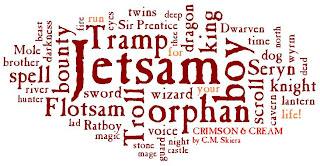