December 06, 2016
I ran another Kindle Countdown deal for my epic fantasy adventure Mirrors & Mist (Book II of the Oxbow Kingdom Trilogy) this past October 20th through the 23rd. I discounted the e-book from $2.99 to $0.99 for the 4-day promotional period on Amazon.

I invested $96 in advertising on three sites; BKnights (via Fiverr) ($11), BookSends ($45), and Bargain Booksy ($40).  I scheduled one promo during each day of the Countdown to better quantify the results for each specific vendor.  Here's how many books I sold on each day and how much each sale 'cost' in advertising dollars:
As shown above, you can see that none of the promotions were profitable this event. Since I experienced success with BKnights previously, I suspect the low sales this time may be due to reader saturation (I'd used BKnights twice prior this year).

In addition to sharing my results here, I also uploaded the data from this promotion to IndieListers, which is a great compilation of book promotion results that I recommend checking out.  To date, it has over 300 promotion summaries from indie authors, and is free to browse with registration.

I'll be doing another Kindle Countdown deal this month, right before Christmas, and applied for promotions on the following sites:

I also applied to a few free sites (eBookLister, Free99Books.com, and eBooks Habit), though I've never had much luck with the free listings. I decided to skip BKnights and Bargain Booksy this time, since I've noticed a consistent drop-off in sales between my first and second promotions with these sites, which I again suspect is due to the same people seeing the ads multiple times. I will probably rotate between sites and return to them some time in the future.  Eventually, I'd like to advertise on Bookbub, but as they are reportedly even more difficult to get into than eReader News Today, I'm holding off for now, as my chance of acceptance is quite low.

This December, I'm giving away free copies of Crimson & Cream on Smashwords to blog readers with this coupon code: KF85E.  Feel free to share the code if you know of an interested fantasy reader. I'll post again later in the month to broadcast the Mirrors & Mist sale as well.

Author Update: I'm continuing to work with my editor on Warlock & Wyrm. We're almost half done, but the process appears to be slowing as the holidays approach.  I'm hoping the new year will bring renewed progress. At the current pace, I'm projecting to have my editor finish her read and comments in February, and then I'll incorporate my revisions and do another re-read (and polish) before getting anything to my beta readers. It's looking like my early 2017 release will be pushed closer to mid-2017. I have another project I'm working on as well, but getting antsy to complete the Oxbow Kingdom trilogy. 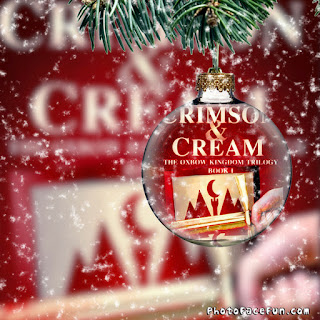