"A thrilling end to an amazing trilogy! After waiting with much anticipation for the final book of the Oxbow Kingdom trilogy, I was not disappointed. This one had all the excitement, adventure and fantasy as the first two, and then some! The descriptive writing captivated me, and as each chapter came to a close, I found myself wrapped up in the story and not wanting to put it down. Warlock & Wyrm took everything from the first two books, and added to the character's depth. The story line was well-developed throughout, and filled with descriptions and details that made me feel like I was inside of the Oxbow Kingdom. I could feel the emotions and empathise with the characters. I loved this well written fantasy trilogy and highly recommend it to everyone from ages 12-112. I am hoping that I don't have to wait very long for the next exciting adventure from this talented author!" By AMC on September 25, 2017

If you're interested in starting the trilogy, you can get all three e-books from Amazon for $10.97. I've also released a paperback version of Crimson & Cream through Kindle Direct Publishing and am working on making Mirrors & Mist and Warlock & Wyrm available in paperback soon as well. After that, I plan to package an e-book 'box set' of the trilogy that will be available at a reduced price. Also, next week (October 12, 2017), I'll be running a Crimson & Cream ebook sale for $0.99 on Amazon.

I'm working on my next blog post, which will provide tips and instructions on publishing ebooks to paperback using KDP (and not Createspace). Thank you again for your support. 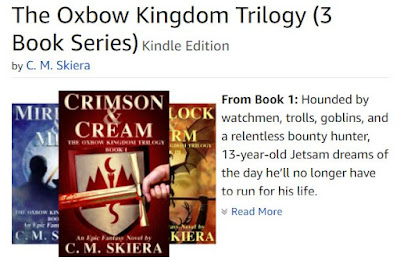