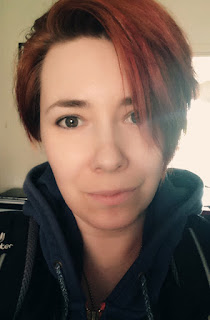 Today I'd like to introduce fellow indie author (and World Literary Café member) M. Howalt and share a sample of her latest serial novel: Conviction. M. Howalt's works are available on JukePop, which is a website for authors to release stories one chapter at a time, receive community feedback, fine-tune along the way, and publish upon completion. M. Howalt's debut serial novel, Aconitum, is available on JukePop in its entirety.

M. Howalt grew up in suburban Denmark, but writes stories that most often take place in a far-away, magical land or a nitty-gritty alternate reality. Armed with a master's degree in English studies, a head full of ideas, a pet cat (or feline overlord as he likes to think), this writer pens supernatural fiction with a literary twist and emotional realism. You can find her blog Muse X-ing here and on these sites as well:

Conviction is a cross-genre, high fantasy novella that you can read for free here:


Book blurb:
In a world where wizardry is an integrated part of warfare, some kinds of magic are considered too dark and destructive to be acceptable even for military use.

Iliya Radov awaits his sentence for war crimes, and it soon turns out that his fate is in the hands of one of the continent’s most influential men who insists on hearing Iliya’s side of the story before the trial.

Conviction is a tale of courage and carnage. It is a universal story of poverty, education and ambition, of scars on the human soul and of decisions of life and death that no one wants to make.

An excerpt from M. Howalt's Conviction: 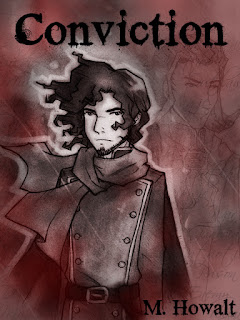 “Fire!” an officer yelled, and one of those useless cannons hurled a metal ball across the battlefield. Yes, it would do damage, but the time it took to load those things … Iliya could have managed two or three destructive spells in that time.

“I can't hold it!” screamed the young wizard next to him.

“You keep up that shield, soldier!” Iliya shouted at him. Sympathy was useless now. “You will not fall! You hear me?”

The blocker nodded and bit his lip so hard it would start bleeding soon.

Iliya never understood how they worked, those defence wizards. He knew the charts and the calculations, of course. How they deflected or absorbed the energy, how they created a bubble of safety around themselves or their peers. Numbers could tell him exactly how heavy and how frequent attacks a wizard of a given strength could take. They made sense logically, but they meant nothing to Iliya personally. He took in the powers around him. He asked to them to lend themselves to him for a while. And in the heat of the battle, when so much was going on, when there was so much magic being used, it was easy to take it and make it his, shape it to become exactly the kind of spell he needed. It was never about not being able to take in enough. Some wizards had that problem. For him it was a matter of controlling the power, directing it, and of physically being able to handle it. But he was in excellent health. His body could take the stress.

Yet, none of that mattered in the middle of a battle. Theory had no place when people around him were dying.

An officer passed the line just behind him. “Hold the formation! Hold it!” he bawled.

Iliya didn't turn around. “We should retreat, sir!” he shouted.

“Your order is to stay on your post, soldier!” the officer cried into his ear, much like he had yelled at the blocker. “Understood?”

“Yes, sir!” Iliya replied. He knew it was a mistake. Perhaps the officer did too. But he had no way of assuming command of them all and this late, a helter skelter retreat would be even more catastrophic than standing their ground. He'd rather die fighting than be hit in the back while fleeing.

An inhuman wail pierced the air. The young wizard next to Iliya was on his knees. The shield wouldn't last for … Iliya didn't finish the thought before a blast hit them. The wizard managed to absorb some of it. It was the last thing he did in life.

A stab of pain in his thigh made Iliya stagger. He glanced down. Blood was already soaking his uniform, but it was not a life threatening injury. He could still fight.

Somewhere on the other side of him, the only place that he could possibly have gone, the defence failed too. “Sir?” he yelled, but the officer never answered. The enemy was advancing quickly. And they were only … How many were left standing? Iliya sent a bolt of nothing towards the advancing troops. It was just light, a blinding flash that would confuse them, but he needed a moment to gather his faculties. No commanding officers. A few soldiers around him, getting ready for close combat. And the other wizards … Iliya realised that he was alone. He was the only magic user left.

Did he make the decision then? He must have. But he had no recollection of it although he remembered exactly what he did. Oh yes, every wretched moment of it. Just not deciding. Perhaps he had already decided long ago that if something of this kind happened, he would do it. Perhaps he had paid more attention to the books without spells in them and the stories that made sane wizards and witches cringe than he had cared to admit to himself. In any case, if there were a moment of decision, it was forgotten, or simply buried so deep in his mind that there was no telling how it happened.