Building my Next Novel

June 13, 2018
Since the release of Warlock & Wyrm last fall, I've been working on a new fantasy novel. The latest book is still untitled, but will be a stand-alone novel set in a different world than that of The Oxbow Kingdom Trilogy. Though I'd also like to continue the adventures of Jetsam, Seryn, and the gang someday, I'm interested in taking the lessons and experience from the trilogy and experimenting with something new.

I'm trying to push myself to break away from the fantasy tropes and standards I relied on for The Oxbow Kingdom Trilogy and inject more originality and unpredictability into my storytelling. I still love writing about pseudo-medieval heroic adventures, so likely the differences from my previous work will be subtle, as opposed to drastically different.

Based on the world-building I've done, I envision multiple books in this new setting, and the first novel may end up being part of a series, but it will definitely be a stand-alone story. I'm not planning on starting any new trilogies in the foreseeable future. Though I loved writing The Oxbow Kingdom Trilogy, I'd like to complete my next project in a shorter time frame.

My work-in-progress takes place in a frigid archipelago setting and features three point-of-view (POV) protagonists. My main characters consist of two men and a woman, comprising roles that could loosely be described as a grizzled warrior, enigmatic priestess, and flawed noble. There won't be a young adult protagonist, although the youngest character will still be in his late teens (new adult).

Because of my love for stories like The Count of Monte Cristo and Best Served Cold, this tale will focus on a revenge-driven plot, although I plan a plethora of sub plots. Religion and mythology will be more integral to this story and it may even drift toward some science fiction elements.

As far as the tools I'm using to write this book, I'm relying on a selection of tried-and-true favorites. I used the framework described in Larry Brooks' Story Engineering to plan and plot the novel. After that, I set up the story scenes and chapters in yWriter5, and plan on writing the first draft using this free software.

After that, I plan to export the document from yWriter5 to Word, where I'll use Pro Writing Aid and its Word plugin to self-edit the novel before sending it to my editor. Ensuing drafts and revisions will likely be done in Word from that point.

As of yet, I haven't used Dramatica to develop my draft as I had originally planned. I may still visit it retroactively to look for plot holes, flesh out character motivations, and other story problems, but for now, I'm charging ahead.

Please let me know if you have any questions or resources to share, and, as always, thanks for following. Oh, and lest I forget, Warlock & Wyrm is on sale (starting at 5 PM PT) at Amazon.co.uk for £0.99. 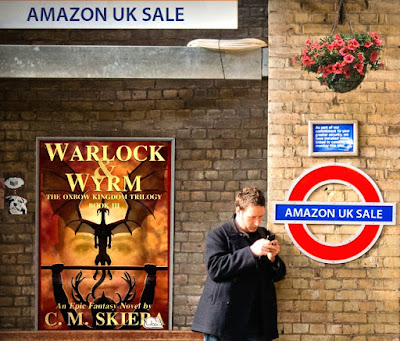